When I was around fourteen I started writing. It was all about telling stories, phantasies – about the ways things could have been. And it was about playing. The writing changed over the years. It became more important. It became my medium to express what mattered most to me. To reflect on things that had been. To work things out: feelings, experiences, dreams, problems; and also a means to discover.

And then it stopped. The words failed me. I started to have experiences that could not be expressed any more in writing. At least I not by me. When I tried I ended up either being utterly superficial or completely incomprehensible – sometimes even to myself. For years, I had no way of expressing those experiences apart from the rare occasions when I could share them with other people directly. I had no medium to work with any more. 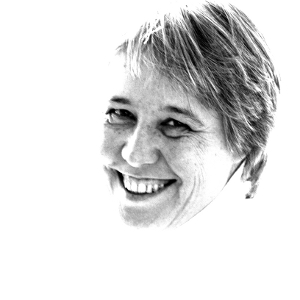 The new one was introduced to me in 2001 at a summer academy. When I went there I had planned for a fortnight of toying with a piece of wood and some nice tools and enjoying a well deserved holiday. Instead I was presented with a revelation.

Wood sculpture felt like coming home. It didn‘t feel like learning something new, it felt like remembering something that had been inside me all along. Not only was it the medium I was longing for to express those intense and sometimes strage experiences. It also turned out to be a means of having them while working on a piece of wood. Experiencing and expressing became two sides of the same coin.

For several years I could only enjoy this sense of completeness during those two weeks in the summer at the academy. When I start a new sculpture I need time to focus entirely on this piece of wood in front of me – confronting it and being confronted. I need space to put a distance between me and this evolving form: walking around it, changing perspectives. Conditions I couldn‘t provide at home.

In 2008 I finally was presented with the place that allowed for these features – including making the accompanying noise, which is considerable. Moving into a loft, making it fit for living and working and making the necessary investments was an important step in taking this gift of being a sculptor seriously. Taking myself seriously.

With this homepage I‘m taking the next step: giving anyone out there the opportunity to see my work, to – at least visually – experience those forms and maybe share some part of the processes.