In the same summer as ‘all-one’, I started this one. During the two weeks at the academy I was working on both pieces in turns. It was a good and very welcome balance to just hit away on this big chunk of beech tree compared to the slow and careful process with the piece of lime. I would have missed the work with the hatchet dearly. The possibility of giving it all without fearing it might be too much. In a way, this compensation enabled me to give in to the other completely different process of working on ‘all-one’. 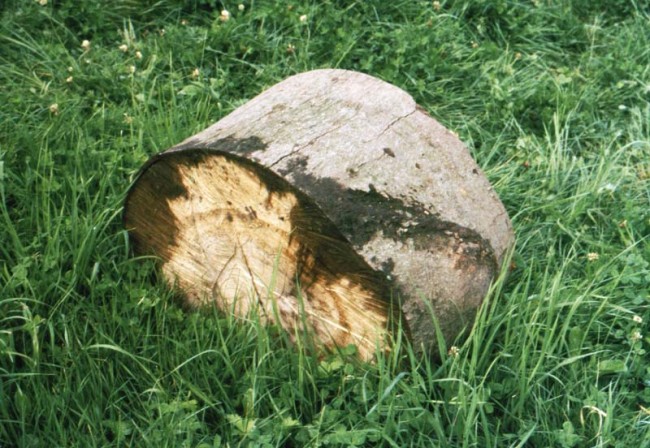 When I found it, it was just a large slice of tree trunk lying in the forest: about 70 cm in diameter and 50 cm thick. No need to carry it, I could roll it to the transporter. I could not have carried it anyway. Maybe this was one of the factors that led to the idea of splitting it into two pieces. Maybe there was a crack somewhere to induce that idea? I can’t remember. I remember it was more of an intellectual than an emotional or visual idea that I started to experiment with: how would one movement or gesture develop into another, which is kind of its opposite. Quite early on I knew there would be two pieces. Though I broke them apart by design, it still came as a shock, when it happened. Yes, there was a crack and after slimming down the connection to a minimum I broke it apart just with my hands. It was one of those crossing the threshold moments: irreversible.

Having cut the rough form 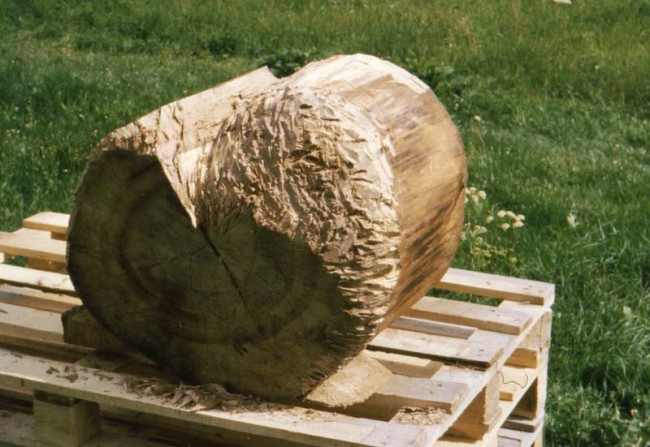 with the hatchet within a week, I worked it out in more clarity with gouge and then rasp at home. It is always strange to realise how I have to change my whole working mode when I change tools. Not only is there a difference between shaping a concave and a convex surface. But switching over from hatchet to gouge on the same kind of surface makes me often feel like I have to learn it all over again.

I started with that half of the piece that resembled a snail-shell. Unfortunately it also had the charisma of a snail. No dynamic. No movement. So I started to make it slimmer and to detach the end of the movement from the main body. There were cracks in it and I knew the danger, but couldn’t stop. I took more and more substance away. The form started to become more dynamic but the risk of breaking grew. I took that risk.

It broke not at the expected point but at another: A second of shock and then immediately a new image, an idea formed before my eyes. A different concept, consisting not only of two pieces but more. An installation. It should be fun to finish it and see how many pieces I end up with …