July 2015: Of course I had to go for the bigger of the two monsters first. It had fascinated me whenever I walked past it. The sheer expansion created by the stem and the two branches! And that was the first idea for the piece: very broad in one dimension and rather slim in the other. 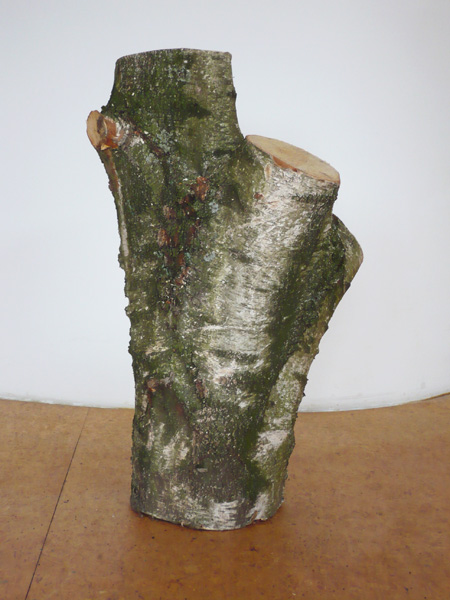 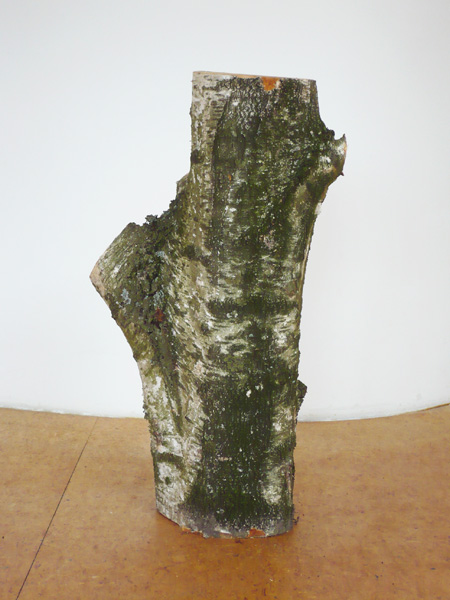 The bark was a piece of work. Clinging to the stem and not letting go. And then after an hour of work the disappointment: not the expected pristine nearly white birch wood underneath but a mix of light wood and dark stripes. Obviously it wasn’t a good idea to let it dry slowly within in the bark. It didn’t only dry, it started to rot. Okay: next time with birch risk the cracks but take of the bark!

There were a lot of movements already in the tree trunk some of which I thought I should enforce or just smooth, others neutralize. There was only one point I was sure about: I wanted to shape a bowl like form between the three branches. But when I started on it something else developed. This was party due to the limits within which I could handle the hatchet in between those branches. And I just went with it. 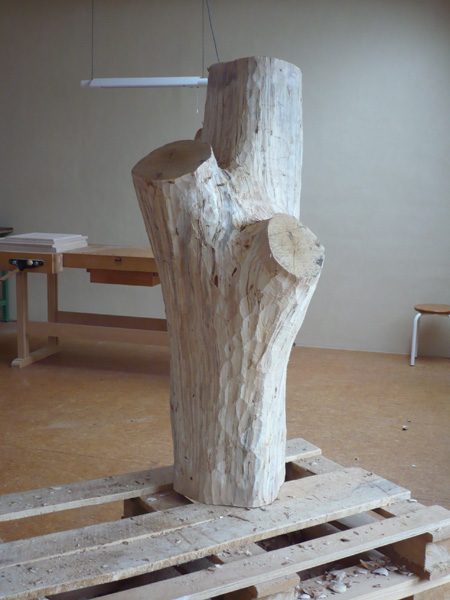 After an hour or so I stopped and put the piece upright. I stepped away from it, turned and it was right there: the image, the idea. But somehow I wasn’t happy with it. It seemed so obvious.

I tried to get rid of that image and see the sculpture in a different way. But its like the elephant. Someone tells you not to think of a pink elephant and all you can think of is a pink elephant. Once I had seen this image internally, it was impossible to see anything else. Finally I gave in and started on it. I thought that maybe something else would develop out of the work itself.  –  It didn’t. But there were still enough tricky details to discover.

This one was different from many others before. First of all I couldn’t connect emotionally with the form or its meaning. It was as if someone else made it and I was just doing the work. Strange feeling, and disappointing because I do enjoy the emotional process even though it might be painful at times. Its the intensity that I like. But there was nothing intense this time apart from the pain in my body. That was the second difference. I had more physical problems than usual. Okay, I went into it untrained right from the desk work. But my body hurt more than I can remember from other times. I took breaks to give it some rest, but that helped only marginally. During the second half of the week I went into the forest for a walk over noon. That was slightly more helpful.

But all of that didn’t hinder me in the process of making the sculpture. During the actual work I didn’t feel the pain and exhaustion. And it developed quite well and fast within those 6 days. Also the title came to me on the second day. I love it when words have more than one meaning!

Its ready to dry now. I could tweak a few more points with the gouge. But that would involve thinking and planning. I’d rather develop those intuitively with the rasp.

October 2015: It did dry over summer. It was dry enough already for a month at least when I started again a few weeks ago. But I couldn’t get myself to work on it. Sometimes I didn’t even go into the workshop because I didn’t want to look at it. It didn’t feel like a ‘block’ – like the equivalent of a writers block. But it also didn’t feel like carrying on. I tried once, but only managed to do some damage.

About two weeks ago that changed. I started working with the rasp without any problem, not even a question. I just worked. And finally the emotional connection emerged. As if my feelings needed that time to catch up with what I had done. And that resulted in some meaningful revelations. 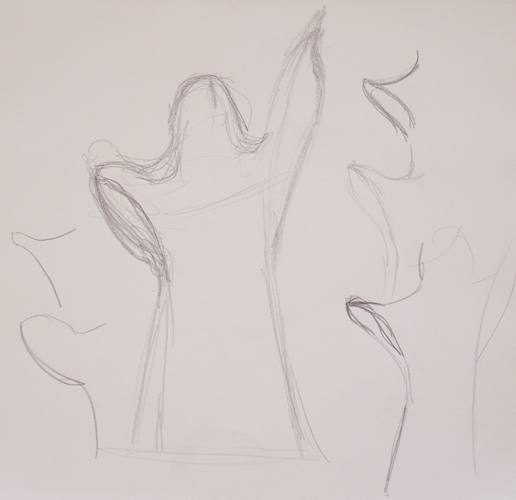 I don’t change the form much, but the clarification of some of the movements changes – at least partly – the expression of the sculpture and thus the meaning it has for me. Some of those clarifications are difficult because its hard to decide which way to go. Sometimes I can’t really imagine the effect of a change before I make it. And after I’ve done it, it’s too late to go back. Sketching helps only to clarify the options but not to make the decision. The latter simply takes courage.

June 2017: I got some work done done during the rest of 2015 and a smaller part of 2016, working on it on and off. It’s a large surface, so there’s a lot to smooth properly. At one point a question still remained and for a long time I didn’t feel ready to answer it. Not that I didn’t know the answer. I just wasn’t in the mood to realize it. There where only subtle changes to make and doing too much would have meant a lot of work to correct that mistake.

Also throughout 2016 there was a lot of deskwork to do for my consultancy business, which kept me busy and occupied elsewhere. No energy left even just for sanding surfaces. In 2017 I finished that project and it became very important to me to finish the sculpture and actually reveal it. Today I did. In the end it was just about finding the right timing: getting to the point internally, where I was ready to finish it and let go, and then let the last bits of work take me there. That has been the case before when a sculpture means so much to me and the process goes on for years.