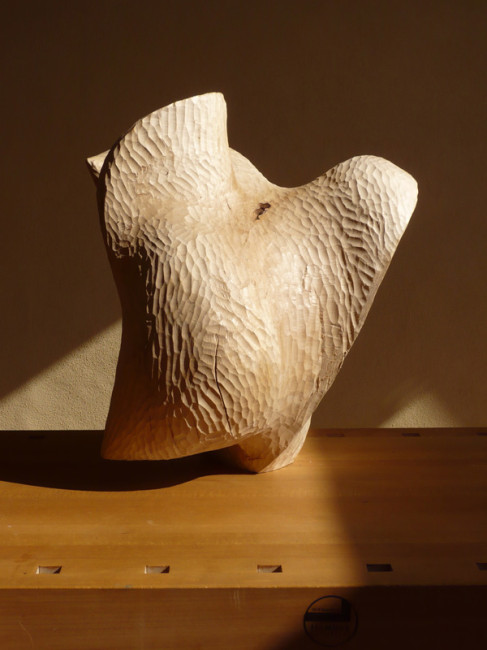 This piece came from the kindergarden next door (one of two pieces). I heard the motor saws and felt my typical ,hunger‘ for fresh wood taking over my attention, leading me away from my desk work. I went to the place and asked whether they could spare a piece or two. They could. So I picked two of the larger ones and howled them to my place. As an experiment I kept them upright while they were waiting for their turn, thinking this would change – and hopefully slow down – the pattern of the drying of the wood and thus would avoid the danger of larger cracks. That didn‘t work out. I‘m not sure, what exactly happened, but both pieces had large cracks half way through the diameter when I checked on them a month or so later.

Cracks are normal. You live with them. And when they are already there – in dried wood – they are often starting points for shaping the figure. With this one I chose to ignore the gap at first. It was the smaller of the two branches that started me off.

Another interesting aspect of this process was, that I wanted – for once – work on a figure that would be lying on its side instead of standing upright as most of the others. So I started working on one side and focused on how to make the three big plain surfaces of the cuts from the motor saw (stem and two branches) ,disappear‘. That‘s hard work, because the wood is so hard at these ‚ends‘.

Also, working on a lying piece, it is difficult to decide which part would be the one that will be at the bottom and thus can’t be seen in the end. A horizontal sculpture has a larger portion of the piece as the underside compared to a vertical one. And as I tend to work all around the stem I want to see all of it. I couldn’t really make sense out of it lying on its side.

This was solved when I put the piece upright to step back and walk around it to see and assess my work during the second or third day. It just happened, that the figure came to a balance on one part of the larger cut at the bottom. This cut of the stem was not one smooth surface but consisted of two parts on two different levels (about 3 centimetres apart) and slightly angled in relation to each other. Standing on one part of it gave the figure an expression of lightness and movement as if it were balancing on one foot just about to take the next step. I loved it!

The rest was easier. Once I discovered the central expression and mood of the piece, everything else developed from there. Part was balancing the weight around this ,foot‘ in ways that worked and enhanced the movement. Part was working out the details of the different movements of the different ends. A bit of difficult craftsmanship was required working out the form of the big gap on one side. It isn‘t easy to work with the tools in those narrow spaces and usually takes its toll on the skin of my fingers…

The large curved surface on the opposite side of the crack was tricky as well for a different reason. Several movements have to come together an each curve gives a direction that has to be in sync with the whole piece. That took some additional trimming when I switched from the gouge and mallet to the rasp.

The form is pretty clear now. I‘m into smoothing the surface, which also gave me the excuse to buy some new tools (rasps and files). But it is not coming along well. I have some excuses: Its cold now in the workshop (winter). And smoothing is not as interesting as shaping although it takes at least as long. But the real reason behind this is – I think – that I have already decided which piece I want to work on when this is finished. And I‘m a bit afraid of that one and thus I‘m stalling. But it doesn’t have to take half a year.

It took more than half a year! And in between I started and finished ‘gift’. (Wonderful excuse to have fresh wood to work with instead of grinding.) It is finished and not finished. The form is there, but the surface is still a bit too scratchy. I want to bring out the grain more. It adds to the movement. And the scratches are disturbing that. On the other hand it is really hard wood. And it has a very strong nearly bitter smell. I’m on it.

It took a few weeks of sanding with different grades – in between work at the desk. Leaves the whole loft and my clothes dusty and the skin of my hands first rough and red and then toughened. But it was worth it. Its gleaming!