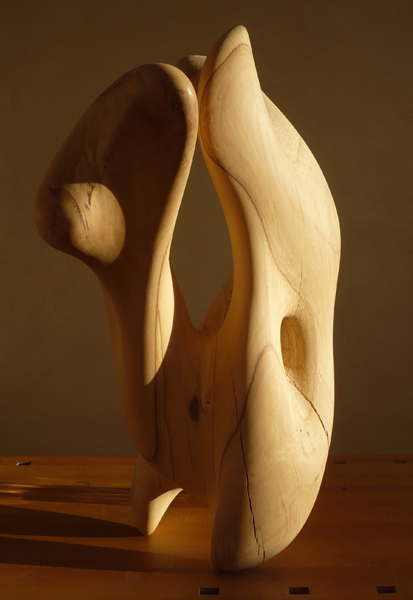 This piece is the result of different forces of nature as well as application of tools. It is nearly unrecognizable as beech wood. The different textures and colours are due to its history in which it weathered in two phases. The tree was cut because its crown broke of in a storm, revealing that part of the tree trunk had been rotten. Hacking away into this rotten part in the centre was the first thing I did all afternoon on my first day. I had planned to work on it during the summer, having secured a place in a friend’s garden. But then job work interfered and I spent the rest of the summer doing the layout for a book. The frustration not to be able to carry on with the sculpture was so intense, that I nearly abandoned the piece altogether after the work of that first afternoon.

A year later I decided to fetch it, take it to my place and see what was left of it. It had been outside the whole fall, winter and spring, although not fully exposed to the weather. Otherwise, I think, nothing would have been left. But it was still a dreadful sight. Rotten through and trough there was only a small portion of wood still left intact. Not enough to make a sculpture. But as it dried out, it turned out that even the rotten parts were strong enough to hold. I took as much of the soft and instable stuff out of the core and then played with the rest. It sometimes didn’t even feel like wood.

The more inhomogeneous parts of the wood presented a challenge in the grinding process. Softer parts would react to the sand paper and even to the fine rasp more willingly than the harder bits. Therefore in the effort of smoothing the surface I often found myself in making it worse. Grinding is hard work for the hands and fingers and it was frustrating to stroke over the surface after several minutes of grinding, only to feel new bumps and dents that had not been there before. The effect puzzled me until I realized the reason.

This is one of the few pieces that have no clear direction. It could be standing on both ends (fixed on some kind of platform) or even lying on one of its sides.

… 2014
I’m starting to have doubts, that this one is really finished. Maybe the reason that it has no clear direction is, that it is simply not there yet. While I’m still in the process of sanding ‘gift’ and ‘move’ my thoughts and glances stray over to the wall at which ‘involved’ is leaning. Some ideas of how to proceed are half-formed. I’m not sure…