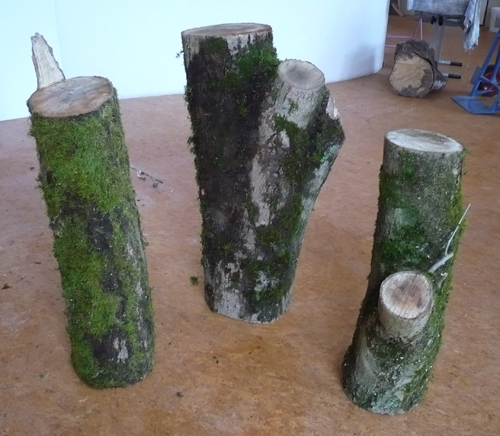 In 2017 a lot of rowan trees caught a disease and the city made the decision to fell the larger ones in the streets. As did some private tree owners. That produced an over-supply of rowan wood at the beginning of winter, a small amount of which ended up in my workshop. Starting into 2018 looked promising! I haven’t had fresh wood on my hands for a while. Couldn’t wait, I started the day before new years eve.

With this one I had my notepad at the table, so whenever I felt like writing something down in the evening, or morning, or at lunchtime, I did. Its not exactly like a diary, just things I’ve noticed during the first week.

Rowan – it seems – is shy. It turns red when you peel off its clothing. It also smells fruity and get’s a little sticky. Some kind of sap in the bark, I guess. A unique smell, which I don’t recognize from any other tree; strong but good. 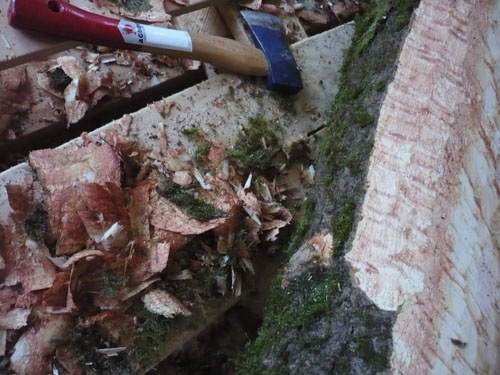 One word is coming up over and over again: flat! Its telling me it wants to be flat. Not that simple coming from a rotund object…
I compromise between form and practicality. Its going to have a rounded lower end, but I keep a flat base so I can put it upright to look at it. I could twist this flat form to make it more interesting. But somehow it is more daring to make it straight: just one overall movement. That thought scares me, which tells me: this is the way to go. And then such happiness flows through my body, telling me: I made the right decision.
Its a relief, to have found the basic form – again! Every time I start a new one there is doubt, even fear, this might be the one where I’m not only stuck but lost: no form, nor idea, just a blank. Silence. Nothing. That is the greatest fear of all. Not to make a mistake, to break it, to fail, but that this voice of inspiration falls silent in me.
This piece needs to let go of a lot of ballast to be so open. That seems like a waste, but is all that stuff really needed any more? 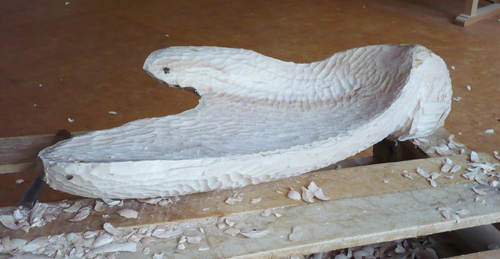 I just wanted to have a look at it, maybe work a little, take it slow. And then I hacked away with gouge and mallet for an hour straight. Couldn’t stop until the whole surface on the inside was finished again and working. At one point I had to laugh out loud. It occurred to me that I did the same curved surface for the third time over. Peeling off another layer of wood somewhere between 1 and 3 centimetres thick. Sisyphus hard at work 🙂
But that’s how it works. Each time the form becomes clearer and I learn more about it and become surer of it. Each time I’m getting closer to the form and surface it is going to be in the end.

The base is gone, the piece can’t stand on its own any more. I guess that is the case with this kind of openness. There is no firm ground, no solid hold. All is trust and balance. It forces me to work differently, looking at the piece lying sideways. But this change of perspective also brings new insights. 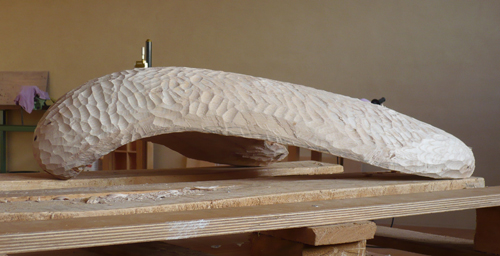 There is a sadness that comes with the finishing of the form in its first rough version. The exhilarating part of finding that form is over: The inspiration, the possibilities, the big decisions, the risks, the actual forming. Now comes the fine tuning, slower, within the limits of decisions already made. There are still questions to answer, the exact form still to define in every part of the piece. But the search is over. Funny it can make me sad to be on firmer ground…
One of the open questions is the character of the edges. I could go for something different than I usually do and make them rather rounded with a kind of 70s feel to it and closer to the fingers of an actual hand. That has its appeal and I can see it clearly in my mind. But I think I go for sharper edges. It has more power. It is clearer in its direction and gesture. The other one would be indecisive in comparison, which is not what I want to express here. Its about the gesture itself and its expression not about the form that expresses it.
Does the head get in the way of the fun? I do enjoy the looseness of the work in the beginning, the openness and wide range of options. Now I need to be more precise and the mind kicks in. Can I still work on intuition only and leave the mind out of it till the end? Is that desirable? Is that smart? Is it what I want? Stay playful and open even at the slower pace!

Oh its one of those! I have a nice form and could leave it at that. But I can also drive it further, risk it, test the limits and find the form that was actually part of my vision. Daring! That’s the aspect of it that is not there yet.

I’m … don’t exactly know what. The form is pretty much what it should be, keeping some substance in certain places to give it stability for the work that still needs to be done. Should I go on fiddling with the gouge and mallet here a little, there a little? Or should I stop here and leave it to dry so I can get to it seriously with the rasp? I don’t want to let go!
And if I let it dry now, should I start a new one in the meantime? Or should I try to work with the rasp on parts that are already somewhat dry? If I start a new one, it is a different story, a new feeling or topic or idea. I’m not sure I’m there yet. So I’m hanging in the air not able to get to the heart of it and let go, and not able to start something else. I don’t like being here!

I started with the rasp at the top of the figure where the wood is thin and already quite dry. It works, if not perfectly. In the end my body decides for me. My right hand hurts and I have to take a break. A day off, hiking, getting some air and seeing other things.

I like these double concave forms. But when it comes to smoothing the surface with the rasp, I usually regret having made them. Its tedious and hard on the hands. Only by applying a constant mix of different rasps they can be persuaded to give way and let me form a surface that runs trough without bumps and holes in it. It takes days! Now I’m rewarded with the double convex surface on the ‘outside’. So much easier!!! 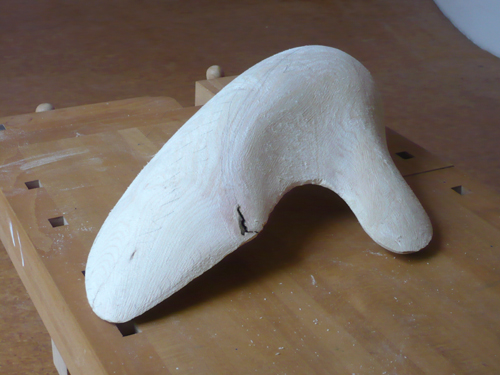 And again I could stop here, smooth it and have a nice sculpture. Play it safe. But that is not the nature of my game. Its not quite where I want it to be. It doesn’t feel like it should. And I still have ideas where to improve it. So back to the gouge and no stopping here.

September:
In the end – after some changes and streamlining – it was quite simple: Smooth it and finish it. The drying process changed the form a little so I had to work on those parts. And the inner part at the bottom was hard to smooth because of the harder wood at the core and the branch. But it looks quite beautiful when sanded with 240 grade paper. I needed my glasses to make sure I didn’t leave any scratches; the disadvantage of age taking its toll on the eyesight. The last bit was to slightly break the sharp edges. I don’t want to cut myself, when I handle it. And it is also not that kind of expression. Decisive yes. Dangerously sharp no.