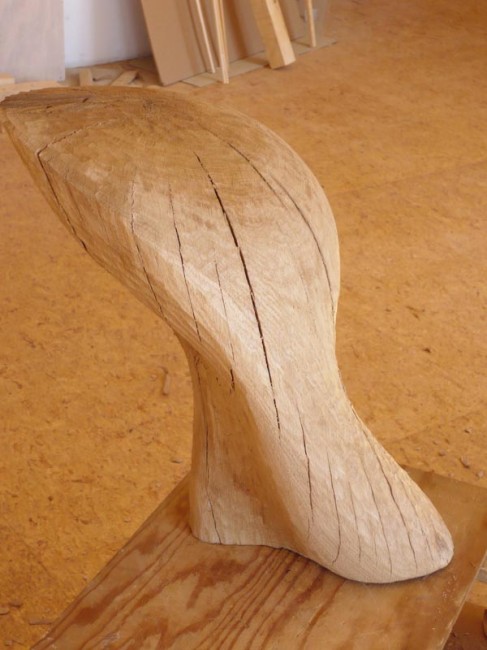 This is the piece with which I kind of ‘baptized’ my workshop in the loft. It is not the first piece I made there but the first time I took the trouble to arrange things in a way that I had a full week in which I could concentrate entirely on the sculpture. No emails, no phone, precooked meals, everything else out of the way. It is like creating a frame within which I have the time, the space, the freedom, to make an experience that otherwise would not be possible. The sculptures that result from such a start are the ones that mean most to me. The ones that take on a deeper meaning.

Like all fruit trees, pear wood is hard. This was even harder because it had dried out completely. Thus, apart from removing the bark, there wasn’t much use for my favourite tool: the hatchet. I also discovered that pear wood has a second layer of wood underneath the bark, called bast, which usually has to be removed because it is softer and not expected to last. And it is also of a darker colour, which could be disturbing the character of the final form. It meant more work taking it off. But it also gave me the opportunity to, before I removed it, try out some initial shapes and see how they would feel.

The development of this piece during its first week is documented in photographs taken each day either in the morning (light is more in the blue colour spectrum) or in the evening (warmer colours of the evening sun). All around the piece shapes and movement developed in different paces as I focused on specific parts of it. But most of these days I had been working on nearly every part of the sculpture, never loosing sight of the whole form.

A tricky moment was the decision to take away another centimetre at the ‘front’ of its basis, making the figure more dynamic but also risking two possible outcomes: making it tip over and breaking away a larger part at the side by cutting its connection to the rest of the piece (there is a crack in there). It would have become a very different sculpture, but I already had visual images of it, if that would happen.

It didn’t. The side holds and it doesn’t tip over – but only just.