Wood, whether still living tree or cut into pieces, never is dead to me. It starts talking to me immediately after I lay eyes on it. I see movement, direction, gesture, feeling, though – at first sight – never meaning. I connect. It has an impact on me, or more like: it creates an impulse. Something within me resonates with the sight of a form that has been grown by a tree. 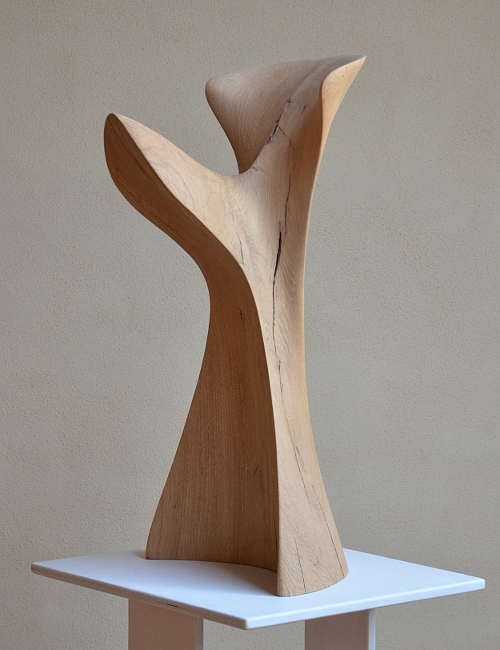 This one was old. Not only had it been cut long before and had been lying in the forest for a while – slightly rotten on one side. When I put it up and walked around it for the first time, an old man was looking back at me – a very old one and quite a character. It was not exactly fear but a huge amount of respect I felt. And when I hit him for the first time, trying to take off the bark with my little 300 gram hatchet, he just laughed! This is oak not lime. Its a different story this time.

So I got myself a heavier hatchet and sent the bark flying. He didn‘t laugh any more, but was far from surrendering. He just grew younger. With every layer of wood I took off him, he lost – well weight and – a few years but none of the character. The loss of weight came in handy. I started to handle him all by myself – at least physically. Its tedious if you have to ask someone else to help you every time you want to put him upright – stepping back, walking around it, sketching, watching, feeling – and lay him back on the platform again to continue hitting, forming, shaping.

Once more – like it happens so often – I had an image of the finished sculpture quite early on: going to bed with some ideas and then getting up in the morning with this image inside me. And even before having breakfast I went into the workshop, picked up a piece of clay and started forming. Within maybe a minute it was there. Only just ten centimetres high instead of nearly a meter. I knew where I was heading – in terms of form. I still had only a vague idea about the meaning and the path it would take me along. When it hit me – step by step – the emotional roller coaster ride began again.

You can‘t prepare for that. You can only let it happen. And then it can lead you to the core of something – something existential. There is an intensity to it, a quality, a freedom that I hardly ever achieved elsewhere. Part of that is based on the setting of the situation: being able to focus entirely on this piece of wood for two weeks. No disturbances, no distractions – unless I choose them.

As the image of the sculpture came clearer before me (as an internal image as well as a material figure in front of me), sharpening at the edges, becoming more expressive and decisive, I struggled with fear. In that struggle I developed a kind of mantra that carried me through many of those struggles: You can‘t do this piece of wood justice. You can only give an answer. There is no right answer. There is only one answer: yours.

I learned a lot about curves. How they work and how to work them to give them direction. The vision I had in mind was elegant and upright. Looking at the piece standing on my working platform, I rather had the image of a circus bear trying to do some kind of sit up and beg – clumsily. I struggled for some time. The advantage of working with oak, and such a large piece of it, was that I had room to move, to try and take a way that does not work until I understood how to do it. Some of these understandings are intellectual and conscious. Others are more holistic.

At one point I experienced what some people call ‘flow‘. I heard musicians also calling it ‘the zone‘. It is one of these places you only really know, when you have actually been there: Hitting away with the 600 gram hatchet for half an hour without any break, moving all around the platform, even climbing onto it slightly, hitting away in constant rhythm. When I stopped I was breathless not from the physical demand but from the experience: the permanent flow of energy through me into the arm into the sculpture. I was sweat through without being tired. It was daring to work like that without the usual break in between of laying down the tools and stepping back to take in the effect of that work. But control wasn‘t necessary. I had no doubt. I didn‘t even think. In some way it felt like not doing it myself.

When I finally put the figure upright again I walked away from the platform across the meadow and only turned, when I was at least ten paces away. And when I did look it was pure joy. The curve you can see in the finished sculpture is at least five centimetres closer to the core of it. But in that moment it was there already, roughly cut with the hatchet but definitely there. No clumsiness any more. The whole form was lifted upwards. It had a standing, a power, it didn‘t have before.

I can‘t remember when the old and then rejuvenating man switched over to female or at least to somewhere between neutral and slightly female. I do remember having a hard time with the area where the branch came out of the main trunk. The wood there looked not like wood but like a myriad of small wiggling roots knotted closely together. The usual rules of wood structure and how to tackle it with a gouge and mallet didn‘t apply here. I managed to break a chunk of metal out of my gouge. And it took some time to make it usable again. I learned a lot about tools and how to maintain them that summer.

After the two weeks in the academy I had to find a way of continuing at home under less ideal circumstances. This figure took five years to finish. Not only because of the lack of a proper work space but also because I wasn‘t there. Some part of it was out of my reach. In several more intense phases, separated by longer times of not even touching it, I managed to work it out – at least to the point, where I was able to finish it.

And even though it was oak, it was a tricky balance again: how far can I go – how far do I have to go. After the hard work with the hatchet, the gouge, and the rasp, at last this piece had a pleasant surprise for me. One go with the 80 grade sand paper and it was finished. That’s oak.