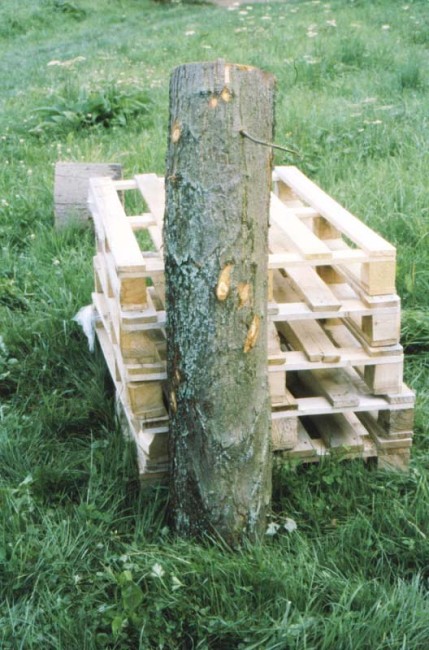 This is lime again, like my first one, but much more volume. I looked for the thickest piece of the trunk, when we all chose our parts of the freshly cut tree. Still the proportions did not feel right. It was too long for its diameter. To cut away about a fifth of the length with the motor saw was a challenge for me. I don’t like power tools much. They come in handy in crafts, but they somehow restrict me in arts. I feel most freedom when I work with the hatchet. A power tool is always possibly dangerous – well so is a sharp gouge or a hatchet. But they feel safer to me because the power and movement they have come from me. For power tools you need to keep a clear head to use them because of their power, a power beyond the human potential. And motor saws are especially dangerous. They can easily kill – within the blink of an eye. I could have asked someone else to do it. But that would have been cowardly. I had done it before and this time there even was appropriate security clothing available.

Maybe – even at this very early stage – I already had a kind of tender feeling towards this piece of wood. A connection, that already went deep into myself. And as lime is such a soft wood, it felt rather brutal to tackle it with a motor saw. I didn’t use the hatchet much on this one for the same reasons. The heavier hatchet would have cut into the surface much too deeply. Lime doesn’t resist like oak or beech or the other harder woods. It surrenders. That made the dialogue more difficult for me. I always felt like I had to hold back. Only the upper part was formed with the 300 gram hatchet. Otherwise I used the gouge, often without the mallet. And still I had dreams of those gouges cutting into my own flesh. A metaphor that can be easily translated, but still is disturbing in the middle of the night. 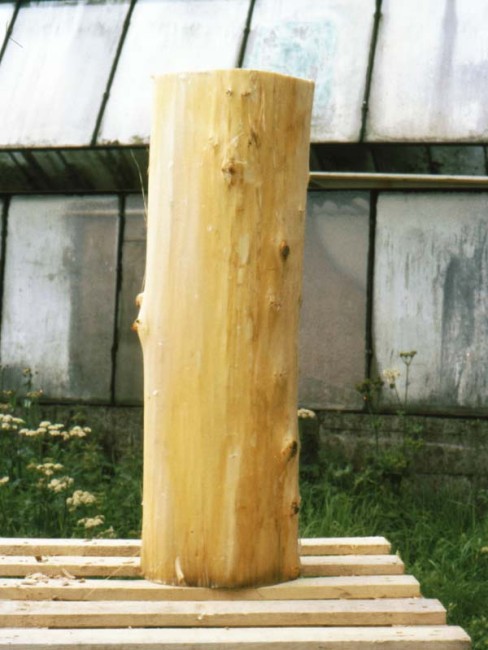 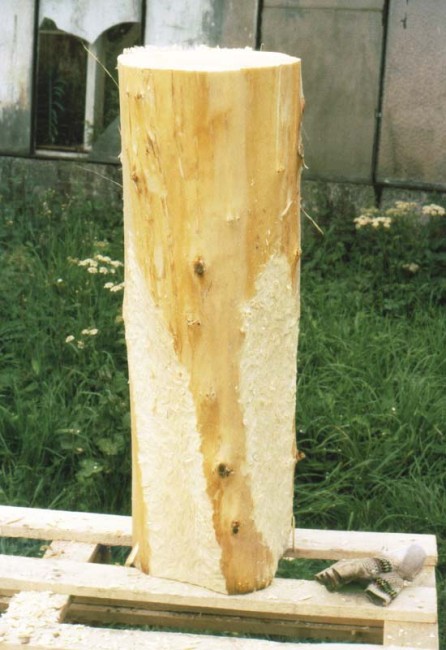 It was a very plain piece of wood with next to no characteristics. Just a straight cylinder. When I first went into it, it was at two points some seven centimetres apart somewhere in the middle. There were the merest hints of dents in the stem that started me of. And right away I felt like wounding the piece and I had to stop again. The part between these two dents later developed into this kind of spine on one side of the figure.

Slowly working things out in more detail and receiving the inspiration for the final form of the sculpture happened in ways I knew from other experiences, just at a different pace this time. A new challenge came with the thought of going public. So far the sculpture work had been entirely for myself. There was no ambition to show it to anybody, maybe apart from a few good friends. The experience of doing it was enough. The focus was on the process, not on the result. The moment I reached the point of finishing a sculpture, it was over. I would not have thrown them away or burn or destroy them otherwise. But the ‘job’ was done.

And here, for the first time, the thought occurred to me, that maybe, one day, I might present these sculptures to a wider audience. It was, then, not the decision to do so, just the opening of a general possibility that had not existed before. This led to an internal debate about responsibility and having an impact, about the intention of doing it, about what it means to me, etc. And with it came questions about how outspoken I wanted this piece to be. It is, in parts, more realistic, figured, than my other pieces. Is this the kind of statement I really want to make? Where is the openness for interpretation? How clear, how precise do I want to get with this? Hiding behind the mystery can be convenient – safe. Saying too much, can be boring – and it can make vulnerable. This debate irritated me to the point where it blocked me completely. I guess it was one important step on the way that – among other things – led to this homepage.

After coming home I did not touch the piece for a long time. In the new workshop in the loft I once worked on it intensively for a while but stopped again not knowing where to go with it. After asking feedback from friends, I was confirmed about the questions that were posed to me here, but I still had no answers. It felt like this was the next one on my list. It was closing in on me, and I had to finish it before I could finish ‘dance’.

Months later and after working on other pieces, I started again and finished it in one go. The changes I made were not that large, but they made all the difference, just distributing the volume in a slightly different way and changing the direction of that ‘arm’ that is coming down from the larger to the smaller part of the figure – within the limits I still had. It opened up the gesture, which was the most important change. And then it was about finalizing the base in more detail, which was difficult in the restricted space of the two shapes coming together.

Also I found out that dried lime can be pretty hard. I didn’t want the scratches of the tools to show on the surface. That meant a lot of grinding. The finest sandpapers (grade 120 and more) brought out the grain of the wood – and the last remaining scratches. Whereas the rougher sanding (grade 80) produced a soft glowing nearly white surface, that suited the feeling of the sculpture.