I never considered myself good at drawing. Never enjoyed the drawing lessons at university. Until I had to – at least partly – earn my living with it, when I had to do technical free-hand sketches for fitting instructions. It turned out I can draw if my life depends on it.

Using sketches while working on a sculpture is a different story. Its not about making a nice or even accurate replica of the piece in front of me. It is a different way of understanding the wood or the sculpture-in-progress. Like stepping back and walking around it or closing your eyes and feeling it with my hands, its about gaining more information about this piece. When I was introduced to this approach at the summer academy it took some time before I got over my old anxieties, let go of all the standards and musts, and come to a place where I could play and experiment with pen and paper. 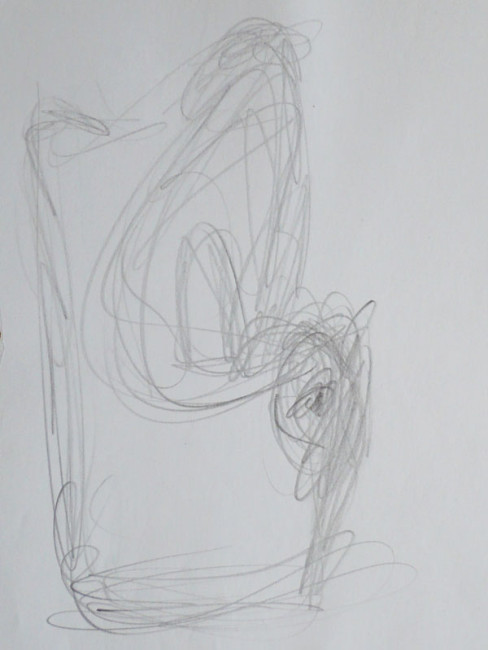 One specific technique quickly became my favourite. The pen stays on the paper all the time running around the outline and main characteristics of the piece pretty fast and repeatedly while the eyes are mostly kept on the piece rather than on the paper and pen. I call these sketches one-minute-sketch because it hardly takes longer than a minute to capture the sculpture from one perspective. Then I move to the next position and do another, either on the same page or on the next one. When I walk around a piece and sketch it from four to six different angles I get a good and rather quick assessment of the current state of development. Especially the method of running the pen around the whole piece over and over enables me to understand the proportions of the sculpture or tree trunk somehow through the movements of the pen. In the process of making a sculpture that is more important to me than accurate details. 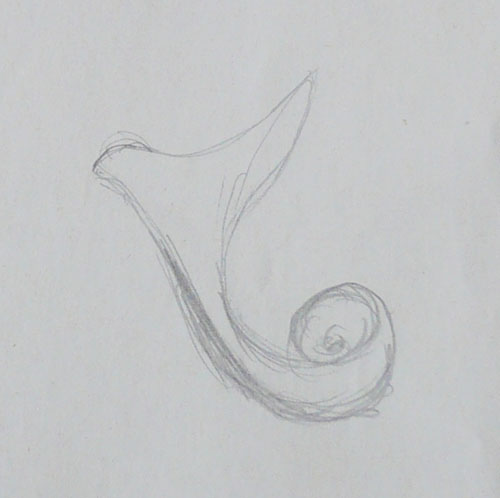 Another important function of sketching for me is to capture or clarify and idea. Quite often I have a visual image of the sculpture – or its idea – early on in the process. And this can usually be captured quickly on paper. The first two sketches of ‘fly ideas’ are a good example of that. The next six are clarifications of that idea while the piece was still in a completely different state (see sketches ‘work in progress’) and the last sketch in the ideas series was done much later for the fine-tuning of the form when it was nearly finished.