Hatchets and gouges create an uneven surface with a lot of little bumps, cracks and dents, even if you become very accurate and fine tuned with these tools. With the rasp I smooth these surfaces into one single movement, removing all the bumping. Unfortunately these rasps have sharp teeth, which create new scratches in the surface. And then the files remove these scratches by creating finer scratches, and the sand paper even finer ones from grade to grade etc.

In a way it is a step by step downscaling of damage I do to the wood. And maybe I feel like I owe it to the sculpture to smooth the wounds I caused. This long process of having less and less impact on the form obviously is, what I need to finally say: its finished – and let go.

The smoothing usually takes at least as long as the shaping with the other tools, often longer. Part of that is, that its not that exciting as the shaping phase with all its revelations and discoveries. Another aspect is, that its very demanding for the hands and fingers and involves most of the injuries in the whole process. How come? Well, as I wrote: the rasps have sharp teeth. And sometimes they bite into your skin instead of into the wood.

I have a whole assortment of rasps and files now, some of which I only need at special occasions, when the others won’t work. Which one is fit for the purpose depends on the shape of the surface. Fortunately there are all these varieties that give me a choice.

My favourites are the more ordinary ones with wooden handle and a long ‘blade’ which is flat on one side and convex on the other and narrows down to a pointed end. I have it in two grades and work with them whenever I can. On surfaces that are convex in both directions I can just move over them with the flat side until its smooth. On surfaces that are concave in one way and convex in the other I use the convex side and turn the rasp while following the form.

If the surface is curved concave in both directions or in situations where access is limited because of other parts of the sculpture, I need one of these special sculpture rasps. They basically have two ‘blades’, one on each end, which are in their form complementary. One side flat, one convex and at the same time curved in one direction. Thus such a rasp works on every combination of convex-concave in a surface. And then there are special forms like cylindrical ones and of course different lengths and grades. 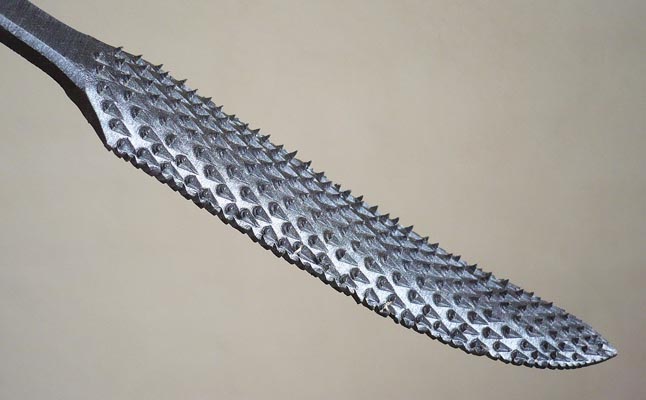 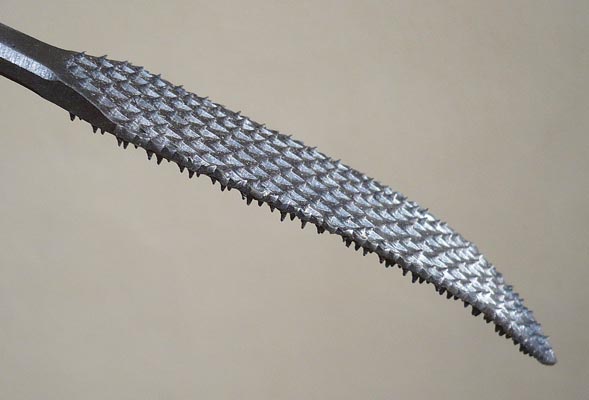 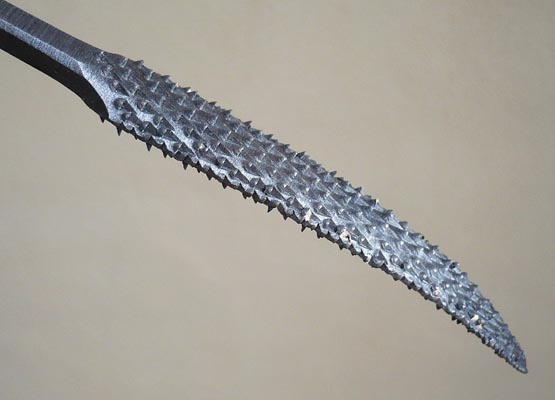 These double-ended ones are prone to hurt you, because working with the rasp requires a lot of pressure. So this time the grip on the handle has to be firm. And on the double-ended ones, your grip – at least partly – is on the other end, which will bite into your palm. That can happen from the pressure alone, but the real injuries occur when the rasp gets stuck in the wood during what should be a fluid movement. Of course wearing gloves helps. But they will bite their way through the leather and still reach your skin. I have worn out several gloves that way just tearing apart the part covering the palm. I don’t like to wear gloves because it dampens the contact with the tool and thus with the sculpture. But wearing none leads to not being able to handle the raps for a few days, until the hand heals up.

In some ways this is my least favourite part of the whole process. On the other hand there are still discoveries to be made. The movements of the surfaces need to be worked out in detail and sometimes I only really understand them in this phase. With the gouge you can still cheat a bit. Smoothing with the rasp you can’t. The sculpture starts to feel more the way I imagined it. It starts to flow.