Working with clay can be a way of sketching – just in three dimensions. And like pen and paper it can support both: capturing ideas as well as clarifying them. When I have my first ‘visions’ of a sculpture I’m working on, I sometimes sketch them on paper, sometimes I sketch them in clay. Those are rough sketches, but they capture the central elements of the idea. 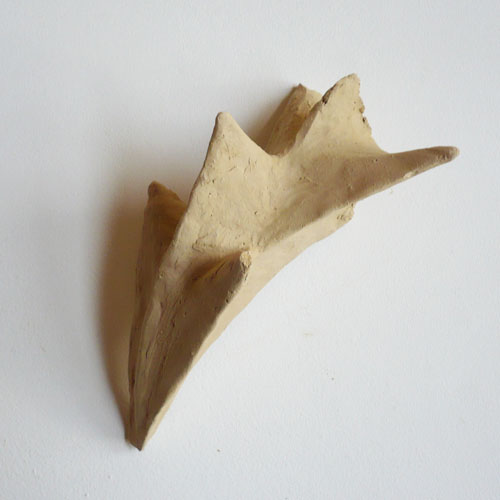 Clarifying ideas often involves only a part of the sculpture. I use it, when I’m not sure about how different movements or surfaces come together at certain points. This is where I need the three dimensions to test variations that I can not test in the wood. Testing in the wood has its limits: what is gone is gone!

In both cases its very different from actually sculpting in clay. Its not about perfection. Its not the real thing. Its just a sketch of an idea, quickly done to understand something. It’s a tool and not the material I’m  working in. I don’t think I would choose clay as my material. It has no – for want of a better word – ‘will’ of its own. It has no direction or inner structure. It just does whatever you do with it. You squeeze and it gives in. I prefer something that presents me with some resistance. An ‘opposite’ for me to develop a dialogue with. In terms of a dialogue, clay just gives you the silent treatment.

But as a tool clay has the advantage that – as long as you don’t bake it in an oven – it can be used over and over again. When it is dry, just break it into pieces, cover it in water and then knead it several times until it has the smoothness you like.