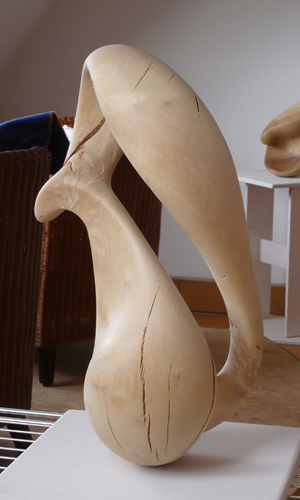 On a treasure hunt trough the forest – hunting for wood to work with – I found this piece near the forest edge, left behind by the forestry people. I had never worked with birch before. It’s a special feeling to cut into this very light coloured substance, although not really hard its not soft either. It matches the impression of this pliable and at the same time tough tree moving in the wind.

There was no image I was striving for. I just went with the character of this type of wood. Breaking through at one point was a tours de force at that moment: very frightened that it might break, as another piece had done before. But it held.

The upper part of it for a long time resembled more a horses head and neck and did not make sense with the rest of the figure until I slimmed it down. The trickiest part was this kind of swans beak, that – together with the curved ‘neck’ – led to the pieces title. Three different movements of three different surfaces meet here. I tried to work out a solution in sketches, in clay, and in thought – without result. There was not much material left so there was not much room for ‘mistakes’. In the end the only way was to actually do it. I think it was the rasp with its fluent movements across the surface that helped me find this form, this last but defining piece of the puzzle.