I needed to slow down! The first two of this batch of oak wood feel rather rushed. It was like an outburst of energy. Maybe a reaction to forcing myself into grinding and finishing air creature before I allowed myself to start on the newly acquired oak. It all came so fast. An idea on the first or second day and off I went. Or I just went… But now I would like to prolong the enjoyment of discovery: the small hatchet, not the heavy one!

First and funny discovery: the importance of perspective. I walked around it, upright on the platform the way it grew. And the basic feeling of it was someone urging others forward very decisively, defining the direction. Then, for some reason, I put it upright down and walked around it again. It had transformed into the opposite: going forward while dragging someone/something behind it – again with a lot of force. 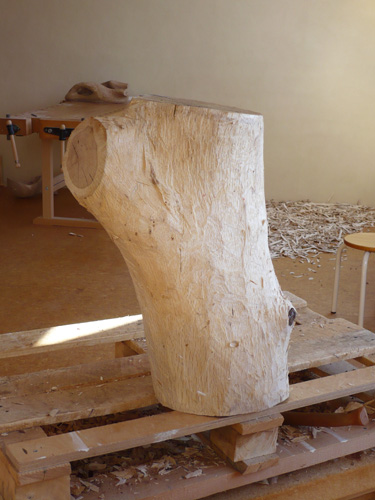 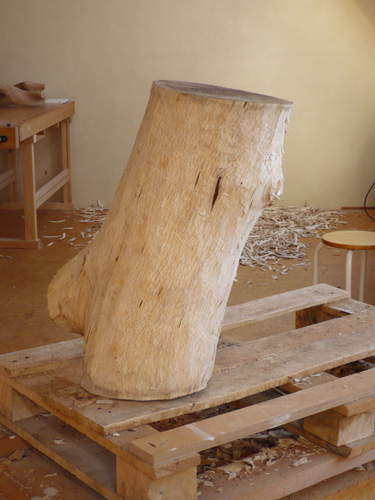 There was something else in there that made me laugh. Futile endeavours? Sisyphus at full steam? A twinkle in the eye, a hidden giggle. Irony? Or rather mischief? Can I use this? I’m not sure where this is going but its definitely more fun than the other perspective.

The emerging image is something between a bird and someone standing with their hands linked behind the back in a pensive mood. Then, while I was taking a break on the sofa, a different image shows up: Sharpening the edges, de-familiarize the original image. Creating a kind of manta ray above something else that I still have to find out.

If it wasn’t for the limitations of my physical fitness I would go on forever! Currently it looks like a cross between a bird on a perch and Trumps haircut. I’m sure that will change eventually. Well, I might keep some of the bird.

Ideas come when I’m resting, when I’m about to fall asleep or waking up. Always the next big step of change. They make me get up from the sofa and go back into the workshop. I can’t let go! Some ideas I doubt at first. But once they are there and keep coming back, they take hold. I can’t un-think them. If they don’t let me push them aside they must be true, must they? Am I holding on to something that is there already, because I fell in love with some part of the form and don’t want to let go? Even if that can’t be part of the final form or gets in my way? I may put some of those decisions on hold till I have to make them. But in truth: I know the idea won’t let me escape.

And with the emotion comes a title for the piece: “yearning”. Got to drive it home all the way!

It seems I have to take out all the gnarly and knotty stuff between the core and the branch. Makes sense.

I’m still stalling. Its still very much a bird. And that little branch-nose-beak is funny and gave me direction. But I think it has to go. Make it pure: one move upwards, not so much forwards. More abstract. Its about a movement not a figure or the association of something real.

The nose is gone. Question is: how deep will I go? Is the front part at the bottom vertical, forward leaning or going inwards? That makes a lot of difference in the movement of the whole piece.

Okay, time to give it a rest. Both because I need it and to let it dry for the rasp work. Also, with the change of the form, the title changed. There were several to chose from. Still not sure about this one.