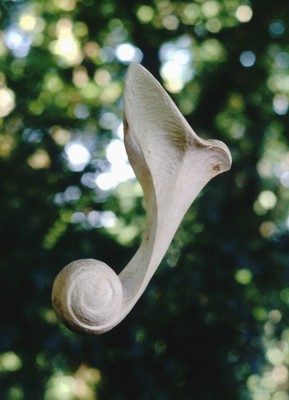 When the tree was cut, I was standing right beside it. I even helped pushing it over. The forestry people had marked it and it would have been cut anyway. But seeing it fall induced a sense of obligation and responsibility: this is serious, don‘t waste it!

I loved working with the hatchet from the start. It just came naturally. But sometimes I was a little too serious. I learned – reluctantly – to play, to let the hatchet play on the surface. Somehow that didn‘t come naturally.

Starting on a new piece, I can’t explain why I’m doing, what I’m doing. That was the case from the beginning. I just started to go into the wood at places where it felt like that. I started shaping the top part of my half a metre piece of tree-trunk into a doubly curved surface, enjoying the form and the process of creating it. No other reason. It was not even intuition. It seemed to bypass conscious thought and flow directly into body, arms, hands and – as it became part of me – the hatchet.

That changed only slightly, when the visual image of the final form suddenly showed before my inner eye. I sketched it within seconds. I could have sketched it with my eyes closed. It had only marginal resemblance with the piece of wood in front of me, although it was definitely in there somewhere. Again, there was no reason, no visible source. It seemed to come out of nowhere: a gift.

The meaning of it hit me the next day. And from there on the struggle began. It had stopped being ‘just‘ form. Linked to a specific meaning, a story, it started to have something to do with me, that I recognized though I couldn’t fully understand it. It was out there in this piece of wood, confronting me like a kind of mirror – just without the precision and clarity. And because it was out there in concrete matter, I could work on it. What I couldn‘t do was turning away pretending it wasn‘t there. The emotional roller coaster ride began. One of the things I’ve learned that summer was, that the creative process can get me into any imaginable emotional state and sometimes crisis. But when I keep on working on the sculpture it also gets me out again. I was exhilarated and at the same time exhausted by the intensity of that process. It was not what I had expected.

Within the two weeks of the summer academy the wood took shape but was still far away from the image I had sketched on paper. To finish it took another year. It was a cautious step by step process, always fearing to go too far and blow it. This method of making a sculpture is special: Whatever I take away with hatchet, knife, rasp or any other tool can never be replaced, no action can be made undone. Its a risk. Every decision, every small step has a consequence and there is only the way forward: live with the consequence and find the ability to respond to it.

In the next summer it was still not finished. It nearly was there but not exactly. Something was missing and at the same time I was afraid to overdo and break it or ruin it otherwise. Its a tight balance in the end. You never no when its finished until it really is.