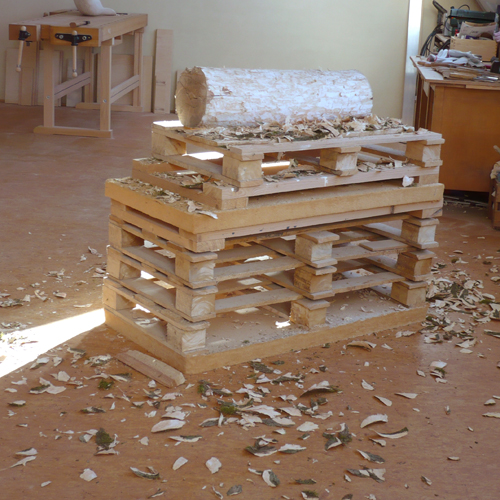 I think, this one is lying…
Usually they stand. This is one of the very few times its lying, if it turns out that way. But as I heaved it up onto the platform I simply didn’t feel like putting it upright. And I learned to trust my first instinct. Glad its still working!
Thought I’d let it just lie there until tomorrow. But then I couldn’t. Had to take off the bark to reveal what is really underneath.
Strange. I never was inspired by a lying piece. But now ideas keep coming fast. I need to focus on letting them go by to keep open for the time when I’m actually working on it. Its no good to have an image too early… or is it?

The hump had to go! It created an interesting form at one side. But from a larger perspective it made to whole thing too massive for the feeling I have about it.
This is always one of the most fascinating parts of the shaping: seeing the different directions in which it could develop, leaving several of them open as opportunities as long as possible, and eventually deciding to go in the one direction that fits – either the vision or the basic feeling for the piece if there is no clear vision, as is the case with this one.
For these kinds of explorations the hatchet is invaluable! It lets me develop the form in a natural way. I see it evolve while making it. And I also feel it on a physical level while hitting the surface over and over again. My movements turn into the movement of the form on a very subconscious level. Motion and emotion coming together. 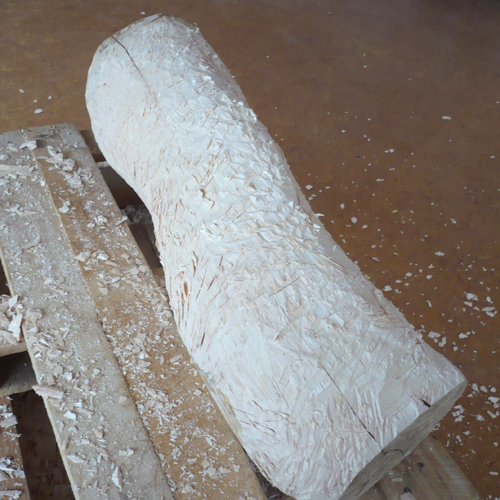 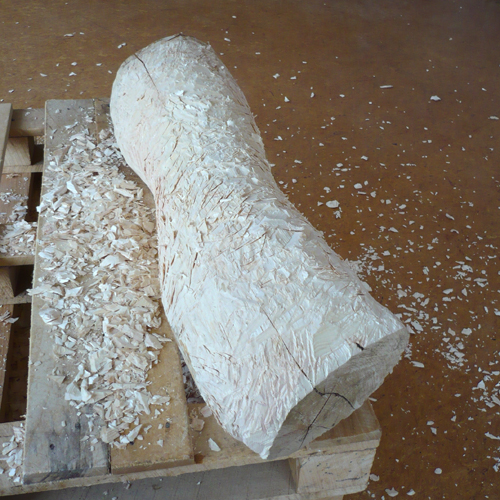 It is astonishing to suddenly realize what I was doing here. I had the title ‘flow’. And I worked on the piece with the hatchet simply playing with forms and movements that did not necessarily come together at their edges. They where still rather disconnected leaving parts of the original surface of the stem untouched. Then I worked over it completely with the knife, which at least optically binds the surfaces together because then they all have the same knife-surface structure. That does not mean, that the connections work! Its just easier to see where they don’t. I made some of the movements more pronounced, altered the ‘hump’, some more corrections here and there to really let the movements flow…
And then I looked at it as a whole and realized I had a rather physical representation of flow nearly looking like a torso. That came as a bit of a shock – out of nowhere. Not sure yet, what I’ll be doing with it. Go with it or change it. 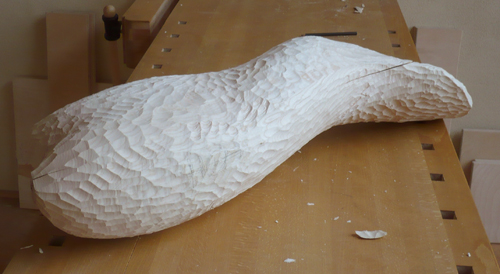 A break!
Obviously I need one and the sculpture too. Working on one of the ends at the rim a small piece near the larger crack broke – not completely off but a small crack appeared and it was slightly loose. Under those kinds of circumstances I resort to the assistance of glue to fix the loose piece in its place. If something breaks off completely, I wouldn’t glue it back in. But to prevent further breaking by filling a crack with glue is something that is within the realm of my work ethic.
This is going to be a tricky spot to work on later anyway. The piece is thinner thus less robust. It also dries faster than the rest. And the large crack that developed simply from the whole piece drying slowly is also a risk. Now the glue needs to harden and I have to find something else to do with myself. I’m tired anyhow so a break does me good.

The piece needs to dry  – at least enough to switch to the rasp. There are still some questions left, but its easier to answer them when I can see the smoothed surfaces after the ‘rasping’. While giving it the final touches with the knife I eventually managed to work the way I wanted to: relaxed and without a fight, just chipping away tiny parts across the whole surface, slowly making the movements flow. The tension is still there but I make use of it in a different way. 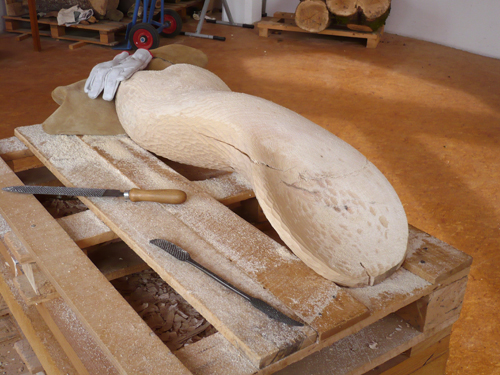 I still marvel how this form came to be. It touches me deeply. Now, working the surface with the rasp, it becomes even more physical. I’m not going for any accurate representation of a human torso – or of anything else. But the feeling of it is there and coming clearer the more flowing each surface becomes.
How does this happen? How can something so completely unintended yet so concrete come out of ‘just playing with forms’ that initially were not even connected? Subconscious? Accident? Something else?
I struggle with this question more than ever: Where do these forms come from?

I had to go back to the knife to solve a problem I inherited from the just-working-on-individual-movements approach. When I smoothed those parts with the fine rasp and the file I realized there was a lot of disconnectedness between the different surfaces. To really bring them together I had to dig a little deeper than it is feasible with the rasp – or at least that would have taken much longer. If its not just some corrections but a real change in the movement, its also easier to do it with the knife. Its more decisive.

The angle of the sunlight streaming through the windows in winter is a wonderful indicator for flow or its absence in a surface. It shows me the ‘line’ of a movement with an accuracy the eye couldn’t perceive. 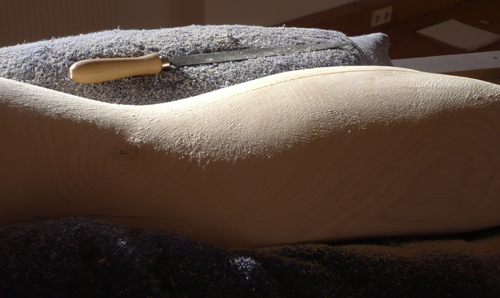 It’s a joy to work in that light when I’m fine-tuning a piece, because I immediately and clearly see the effects of my actions. There is still work to do but all in all its pretty far already.

Summer:
I had to go back to the knife to solve a problem I inherited from the just-working-on-individual-movements approach. When I smoothed those parts with the fine rasp and the file I realized there was a lot of disconnectedness between the different surfaces. To really bring them together I had to dig a little deeper than it is feasible with the rasp – or at least that would have taken much longer. If its not just some corrections but a real change in the movement, its also easier to do it with the knife. Its more decisive.

Finish:
The final fine-tuning also took a while. Again the angle of the sunlight (now low again in September / October) shows me exactly where it does not flow! Another problem is, that the sandpaper grinds deeper into the softer wood of the year rings. But I leave it like that – to a certain degree – so there are waves flowing within the overall flow, if you look very carefully…