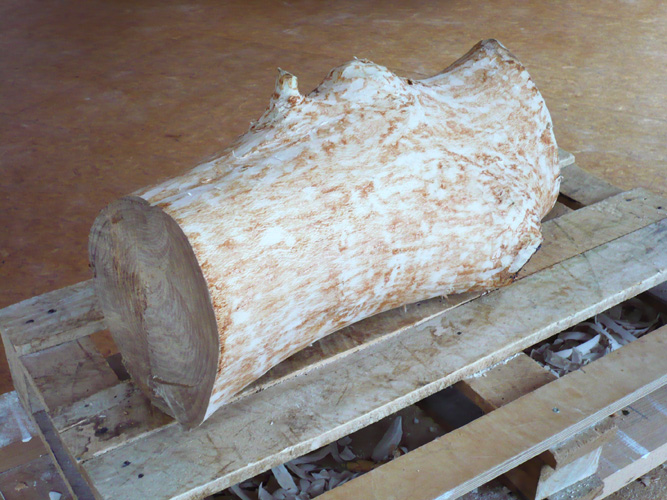 prelude
Got the bark off! That was some peeling effort. Using the blade of the hatchet like a scraper. But there was no getting in between bark and hard wood. They are quite attached to each other. I had beech before but never this fresh. And as with the rowan the inner layer of the bark turns from withe to red when exposed to the air; although the colour is less intense and the sap less sticky and lacks the fruity smell.
The piece works with the image I got while working on air creature – which for now I give a deserved rest. Should I go with that image or wait for something else to emerge? And if I go with it, which end is top and which is bottom? I’ll sleep over it and see how it feels tomorrow in broad daylight. 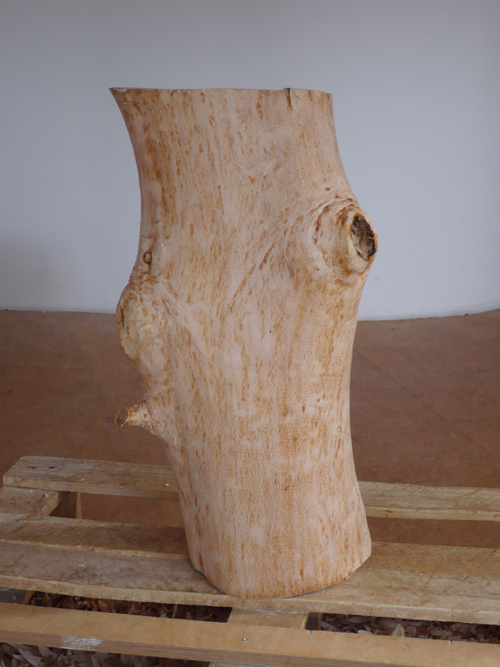 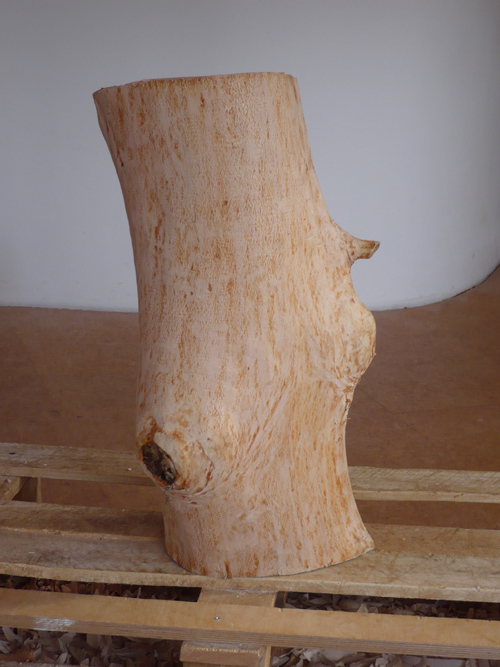 I realise, I’m afraid of following this vision. That is usually a very good indicator that I should follow it!
Also: when an idea has taken hold, it is very difficult to think of something else. If someone says to you: “Do not think of a red Ferrari!”, it is impossible to avoid exactly that image and not think of it. The subconscious doesn’t understand the negation “Not”. So though I explicitly did not decide yet to go along with the current vision of this piece, my subconscious is delivering lots of images and ideas how to exactly do that: where to start, how to go about it, and providing flashes of the form itself.

day 1
I have to stop working because the light is fading and working in artificial light is not the same. I was worried that this might be less fun. That knowing the image from the start would be less of a discovery and more like craftsmanship. But it isn’t. Mainly, I guess, because the image is not concrete in its form. Its more of an idea: a hand holding a bunch of flames. How these flames flare is what I’m finding out step by step. Yes, I had to ‘construct’ the hand as a basis. But all the rest is pure discovery while I’m working. Sometimes going with the movements of the wood and accentuating them. At other times working against what is already there, taking away, going in deep. It is a lot of fun! And the fear takes a backseat at the moment. Its still there, but just enough to fuel the necessary tension and curiosity.

day 2
It is like pure shaping. I’m chipping away at different flares that emerge from the stem, finding new twists and turns and sometimes connections between them. I wish I could go on like this forever! Every time I stop is like waking up – from a different reality. Or maybe it’s the other way round? Waking up the moment I pick up the knife and hammer and start shaping. And when I’m not working I’m incredibly tired.
At the moment I don’t have much concern about the piece as a whole. But for this one its not so important anyway. It is about the twists and turns. I’m curious what will come out of it.
The pace is slow today. Yesterday was about some initial ideas and forms. Today is already about refining them and in the course of doing so, finding new ones. 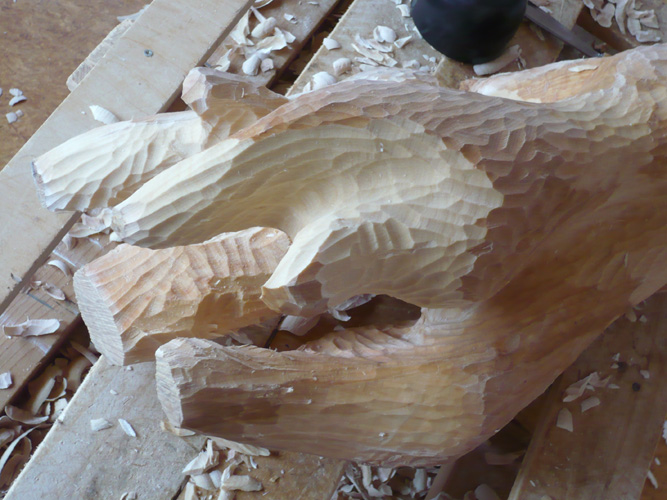 the wood is still wet, so the color changes when the surface dries over night 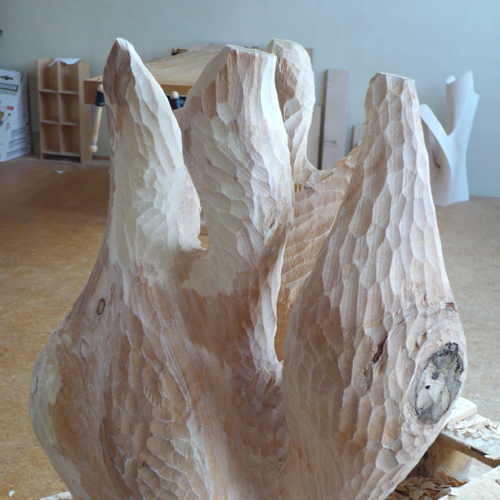 I kept this one flame in the middle thinking its form will come out of the others in the end. It started as a nice idea: something at the core. So I kept it. But digging deeper from all sides diminished it more and more until now it looks like just an outcrop of one of the main three flames. And I thought I’d finally give it a form, which diminished it even more. Its still a nice idea, but suddenly I realised there is another solution that might be much more appealing: take it out completely! I leave that idea as such and take a break to let it sink in. But I like it already and I’m rather sure I’ll do it.
The whole thing stands again on its own without the support of wood chips tucked under it from the side and the front. The hand at the bottom is still rather large. More of a paw. I have a slightly different vision of it, an open palm with the fire sitting on it, instead of this version, holding on to the fire. But that is probably not possible. The fingertips would be in danger of breaking off. And there would be now way to remedy that once I’ve chosen that path. So I surrender to the limits of the material and let the hand hold on to the flames. But maybe not that tight. I can open it a bit more. Yes! Good idea to take that core out. And the rather iconic form that is revealed in the middle is just perfect. Lets see how long it stays. The uneasiness I felt this morning is gone. Something hindered me and I couldn’t see what it was. Obviously it was that chunk of wood in the middle. Now that its gone it opens up the whole sculpture in so many ways. And I feel in motion again, knowing what to do next, and next, and next…

Sometimes I look at these sculptures and think: How did they come to be? How did I do that – did I really do it? As if I had no part in it. Which is the opposite of what I feel when I’m working on them. Then I am very much involved, though in a different way than with other kinds of work. It doesn’t come so much from the mind and is then carried out ‘by the rest of me’. It’s a joint process between me (all of me), the wood, the tools, the place, plus something else that is invisible and hard to pin down. Its not the only or most important factor. It is just the most mysterious one. And without it, I’m sure, these sculptures wouldn’t exist. 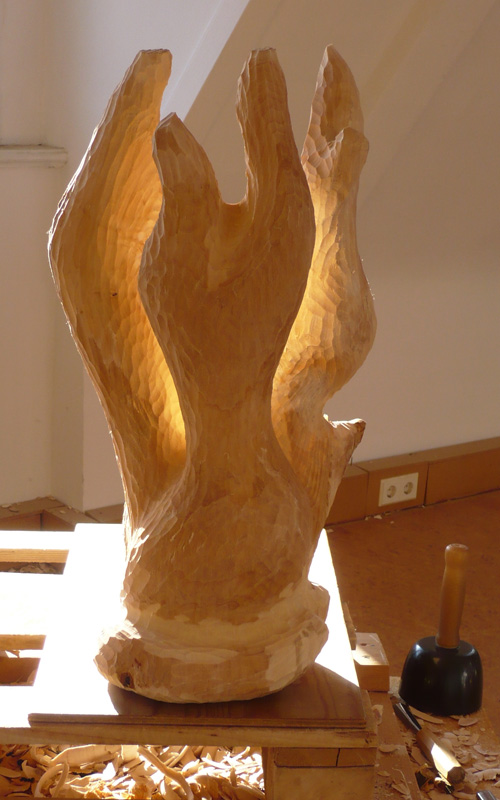 day 5
Just a few more adjustments and going deeper in the middle an now it needs time to dry.

day 6
Working on air creature again. But I finally have a title for this one that feels right.