Summer academy 2007. After having worked on the ‘little dragon’ for several days, I was presented with this big chunk of oak. Pretty straight, with only two main characteristics: a thick branch coming out of the side and a stump of a branch lower on the opposite side. It also had a few deep cracks that were not very visible because they were not split open wide but just rotten. I started with the cracks and followed them inside. 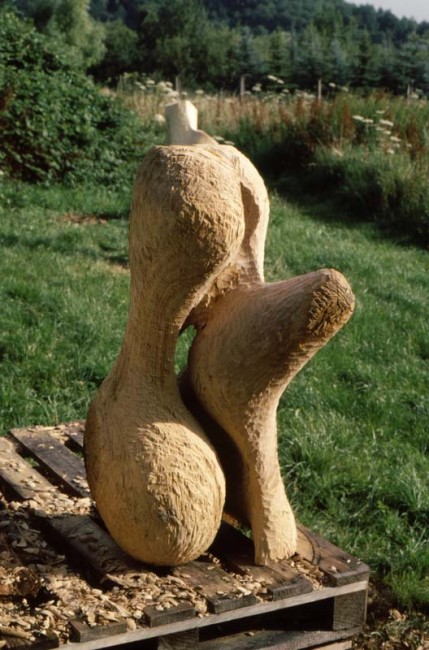 The beginning was fun but then it was getting harder and harder. Not because of the wood or any other technical reason, but because I was used to a clear vision of the final sculpture that would come to me somewhere during the first week of working on it. Only, this time it didn’t. It was like flying blind. I had a feeling and an idea about the theme of the piece, but no visual image. First I thought I just needed to be patient. Then I feared I had lost my visionary abilities. I reflected that trying to hard for the vision would exactly block it – and so on. I struggled for several days until I let go of the idea that there had to be a vision at all. It also meant to let go of the certain amount of control that following a vision provides. Flying blind requires trust. Once I really let go, I could start to play. The process developed into a dance around this piece, working more freely than ever because there was no worry about achieving a specific form. A very strange experience at first.

Working with a piece of wood is always a dialogue for me. And although it is physically and emotionally taxing, it is never a fight – at least not with the wood. In those cases where I have an image to work towards I don’t impose it on the wood. There is still a lot of room to move and a lot of questions to which I have to discover and develop answers. This time it was pure discovery. The form – that is the space – between the two parts of the piece developed out of movement and the possibilities and limits of the tools. When you cut away material from both parts with the knife and hammer this kind of corresponding curves on either side of the gap are a natural result. I went deeper and deeper from two directions in turns until the breakthrough. And when it came, the movement on one side seamlessly and fluidly matched the one on the other side. Obviously in this dance I was very much in tune with the piece and with myself. Blissful moments! 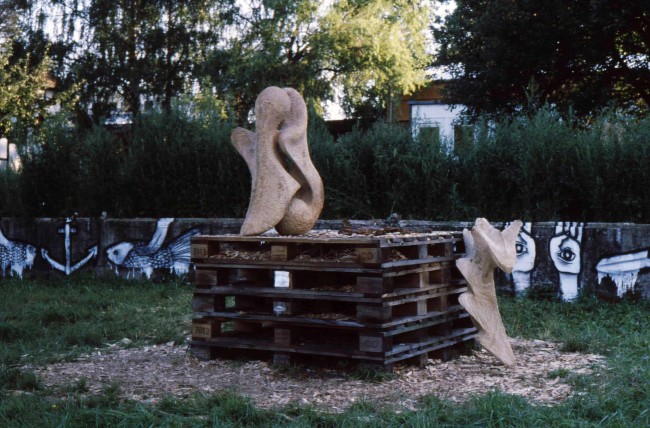 I have not touched it since the academy. Looking ahead I’m still not sure about the final results. But I think I will separate the two parts completely to be able to work out the insides in detail. At the moment the gap between them is too narrow to get inside with the necessary tools to smooth the surfaces. And in the end I would like to mount them on a platform in the exact position they are in now.