These eight pieces of beech are from the same tree. It had been standing in front of the house in which I grew up. Coming home from school or from elsewhere, this tree had been my signpost, my guide. When the talk started about cutting it down (because it was getting huge and becoming a danger for the house itself) I refused point black. Only after I discovered sculpture, I found a solution that I could live with: “You can cut it down, but I want the wood.” I was there, when they cut it down. 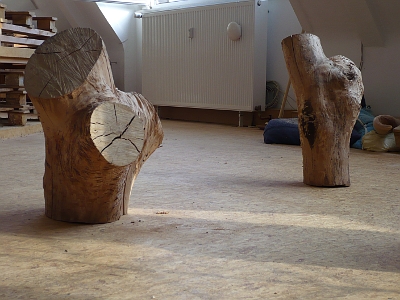 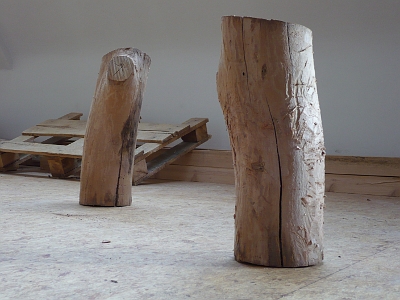 It must have been more than sixty years old. The diameter at its base was more than I could embrace with my arms. And its top was waving above the roof of our 2.5 storey house. The resulting amount of wood was overwhelming. The large pieces – the main part of the material – was transported and stored by the company that had cut the tree. But eight pieces where small enough for me to carry them and store them at the back of the house. In the end, those were the only ones left.

It was still the time before I moved into the loft, when the gardening company called and told me I had to organize the transport of the wood, because they were about to move to another place. I was exited and a little scared but found a space to store the wood at the place where I lived, and a company that would organize the transport. For the first time the thought occurred to me: ‘What on earth will I do with all that wood?’ Well I had ideas, visions, of a series of figures that would be different from anything I had done before. But it would take years to realise that. The day before the transport – between exhilaration and doubt – I got a phone call: The wood is gone. At first I didn’t understand. Then I couldn’t believe it. It took a while to take it in. Like something important and dear had been taken away from me. The wood had in fact been stolen and it very likely ended up in someone’s fireplace. But there still were these eight smaller pieces.

Looking back it was probably a blessing to be released of that inner commitment I had made to that tree and its remains. It would have been a fantastic project. But it also would have bound my creative energies for a very long time. 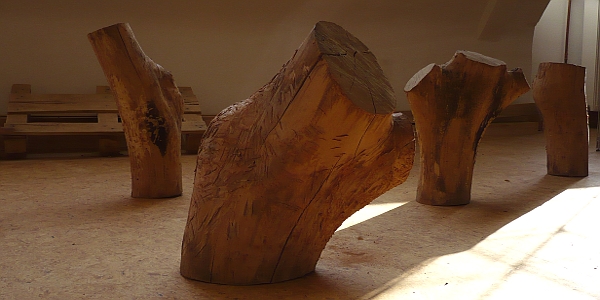 The remaining eight pieces found their way into the wood stock in my workshop. After a while I was disturbed by strange cracking sounds coming from that corner. First I thought, that this was a by-product of drying. But I soon realised that it was woodworms nibbling away at my precious pieces. As most of them were living near the bark the cure was relatively easy: I just had to free them all from the bark and the outer layers of the trunk (although you can still see some of the wormholes in the finished pieces). I did so in one go, putting each bark-free piece aside, upright in one of the open spaces in my workshop. When I was finished they were all standing there in a kind of circle. And what had developed out of a working process became an idea. There were quite some characters among them and this group arrangement started to make sense already in their natural form.

I worked my way through the group one by one. Some of them developed into something else (‘dolphin’ and ‘entangled’) that did not fit in any more. Also ‘tiptoe’ is a left over from a piece that had cracked in two before and was not part of the original group. The other five have been developing out of pure intuition and feeling for an expression that somehow came out of each individual piece. They are still standing in a circle. Sometimes I switch positions and mix them in different ways. Sometimes I wonder what they cook up while I’m not in the workshop. But they always clean up nicely and so far there haven’t been any complaints by the neighbours.